A few days ago, my brother suggested that I try one of the restaurants that he and his friends would normally go to. I was told that the food is really good and very affordable too so I decided to join him for lunch last week.

Qubiertos Grill & Restaurant is a Filipino restaurant that serves reasonably-priced quality food. For those with big appetites but with a small budget, this restaurant is a really nice place to hang out with your buddies because they also offer unlimited rice. 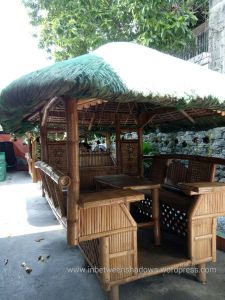 I didn’t get a chance to see the restaurant’s interior since my brother went straight to one of the available Nipa Huts that they have. For those people who enjoy occasional smoking before and after eating, you can opt to eat outside. Aside from the Nipa Huts, they also have a few more tables situated outside the restaurant. 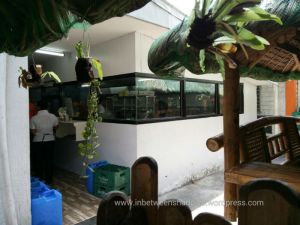 From what I gathered, this establishment has a big space because they even have a separate area for grilling their meat. I forgot to take a picture of the grilling station but it was similar to the 2nd photo above. This means that their main kitchen (2nd photo) is where they do all the cooking (except for grilling). The 1st photo is the one that is directly connected to the indoor dining area. It is actually just across the Nipa Hut that my brother chose. I could see some staffs there washing some dishes but I’m not sure if that’s where they do all the washing or not. The manager’s/cashier’s corner is located in that area too. 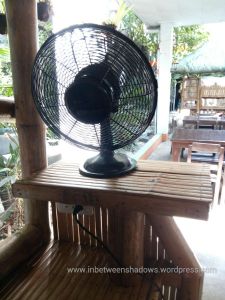 I like that the Nipa Huts come with a socket so you can actually charge your phone/laptop there if you have too. Plus, I was really delighted to know that the restaurant also provides small electric fans so that people who choose to dine outside won’t have to worry in case the weather is not too kind. 🙂 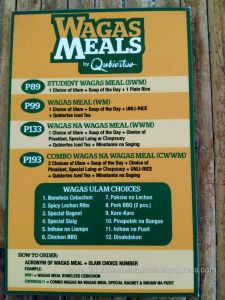 I was told that most of their meals are good for at least 2 people but since my brother just wanted to drink coffee, I decided to go with their affordable “Wagas Meals”. I chose the 2nd option (Wagas Meal – WM) which comes with a choice of “ulam”, soup of the day, unli-rice, and a glass of iced tea. The dishes that you can choose from are the ones listed on the “Wagas Ulam Choices”. Since Pork Sisig is one of my favorite dishes, I went with that instead. But for the rice, I didn’t really want to take advantage of the unlimited rice because I wanted to try their Bagoong Rice so I had to make a separate order for that since the Wagas Meals inclusions can’t be changed.

If you are looking to drink some coffee too, you’d be happy to know that Qubiertos Grill & Restaurant has their very own cafe on their 2nd floor. If you choose to have your coffee in the Nipa Hut, you can just let the waiters know so that they can call their server and have their menu brought to you.

The Bagoong Rice was just okay for me. I tried tasting it without the Sisig and I found that it lacked the Bagoong taste to a point where it almost tasted bland to me.

The soup of the day is Bulalo Soup. My brother asked me if it really is Bulalo soup because he said that when he had it before, he could only taste beef cubes. Well, I tried it and I did get a taste of Bulalo and it was flavorful.

Just like the Bagoong Rice, the Pork Sisig was just okay for me too. The thing is… Pork Sisig is really one of my favorite dishes which means that my standard is way high. There is a distinct taste that I normally look for in Sisig, which I didn’t find in this one. I can definitely say that I have tried so many restaurants that have better tasting Sisig than this. The Sisig I had in “Mang Inasal” or even the one in “Sisig Hooray” (usually found in food courts) are even better.

After eating my Wagas Meal, I felt the need to try another dish from their menu so I made an order of their Baked Tahong. I remember waiting for almost 20 minutes already but the food still has not arrived. I asked the waiter how long it will take and he said that according to the kitchen staffs, it will take about 20-25 minutes. Since I already waited 20 minutes long, I told the waiter I’ll wait for 5 more minutes. I actually timed it using my phone’s timer but 5 minutes have passed, still no Baked Tahong in front of me. I asked the waiter again how long it will take and he said that the kitchen staff told him to wait for 3 more minutes. I set the time again and told him if I don’t get my order in 3 minutes, I’ll cancel it already. 3 minutes have passed and still no food so I told the waitress to give me the bill and remove the Baked Tahong from the list. She said that the food is almost ready but I refused already. A few more minutes have passed and our waiter brought to us the Baked Tahong but I said no. He said that he will be charged if we cancel the order so I told him “Bakit ikaw ang ma-charge? Dapat yun sa Kitchen ang ma-charge since sila may kasalanan”. I told him to call their manager so I can talk to him personally. When the manager came, I told him that they shouldn’t charge the waiter since it was the kitchen staff’s fault. The manager assured me he won’t charge it to the waiter (who happens to be just a trainee, by the way). The manager apologized for the long wait and he was nice enough to offer me to try their Baked Tahong but I refused since I lost my appetite already. Even though I didn’t get to taste their Baked Tahong, I did see that the Mussels were really big and seemed to have a lot of melted cheese on it. For Php195, you can get 10 mussels already so price-wise, not bad. 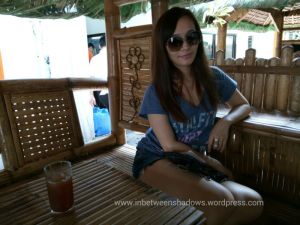 You would think that my experience dining at Qubiertos was over the moment I left but, unfortunately, that was not the case. Several hours after my visit, I noticed something itchy on my left thigh and when I looked at it, I saw a big bump and I thought that maybe it was just a mosquito bite so I brushed it off. After a few more minutes, I felt an itch again and when I checked it out, I noticed that it was a different bump. I couldn’t see quite well but when I checked it with a mirror, I was surprised to see 17 bumps (Yes, I counted!)  just on the back of my left thigh and 4 more on the right thigh. 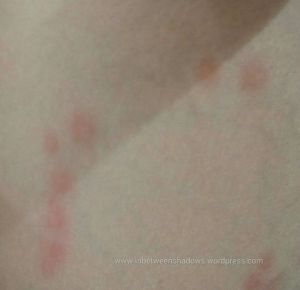 I initially thought that it may be a food allergy but then I remember feeling a sudden pinch on my left thigh while I was in the Nipa Hut, long before my order arrived. I showed the picture to my brother and he told me that he had something like that before and he didn’t know what it was but when he saw mine, it all made sense to him. Whenever he would dine at Qubiertos, he and his friends would always sit inside the Nipa Hut and sometimes he’d notice some red bumps hours later.

You saw a picture above showing what I was wearing when I went there so where else would I get it. I described the bump to our helper and she said it might be a “surot” bite. I honestly don’t know if it’s from that or some other forms of insects but I am not happy at all. It is so itchy and so red that I am currently unable to wear shorts when I go out since the bumps are way too noticeable. It has been 4 days already but the bumps are still evident though not as itchy anymore. I just hope it will be gone soon.

Someday, I will try dining here again. My experience waiting for my Baked Tahong was not good but I don’t think that this is something that happens there all the time. I will say this though… the next time I eat there, I’ll make sure to skip the Sisig and the Bagoong Rice and to sit on an actual chair – far from the Nipa Huts.