Every year, we try to celebrate our parents’ birthday either at home or at a restaurant. This year, we thought of doing the celebration in a buffet restaurant that we haven’t tried yet so I decided to look for some buffet deals online and came across “The Food Club Manila Buffet Restaurant” on Ensogo. They were offering a weekday dinner buffet for just Php568 instead of Php839. I looked for reviews about the restaurant online and found a few good ones so I thought it would be good to try it. We ended up purchasing a total of 19 vouchers since it also included a few of our relatives. Just like other buffets, birthday celebrants get to eat for free on the day of their birthday as long as they are accompanied by 1 full paying adult so my father got to eat for free. 🙂 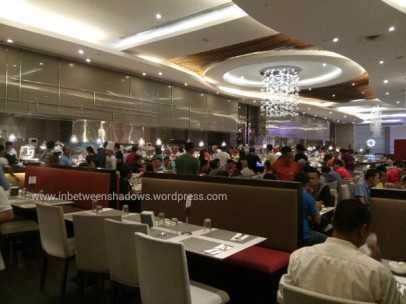 When I called the restaurant to make a reservation, I was already informed that the only available seats are the ones closest to the toilet area since another customer already booked seats for 100 people. Initially, I thought it would be just fine since our group has a few seniors so being near the toilet would be convenient for them.

When we got to The Food Club Manila, I was very surprised to see how packed the place was. I was expecting the restaurant’s space to be huge but with 100 people already there, it felt cramped. The seating arrangement were tight and there weren’t a lot of space between the buffet area and the tables so to be in the same place as those 100 people (who knew each other) was not that comfortable at all. The seats that were given to us were not that good and it’s not just because it was near the toilet but because the style of their seats and tables were just so wrong for a buffet restaurant.

Their table above seats 6 people, 3 on each side. Now, the problem with these types of tables is that if you are the one seated closest to the side of the wall then you will have to disturb the other 2 people seating on the couch and excuse yourself every time you need to get out of there to get some food. Imagine how inconvenient that is.

When you eat in a buffet restaurant, you want to be able to eat as much as you can so that your dining experience would be worth it but if this is the kind of seats you have, you might not feel as comfortable as you would like to be. My mom certainly got a bit irritated every time she has to scoot over so seat-wise, The Food Club Manila Buffet Restaurant was a complete failure. 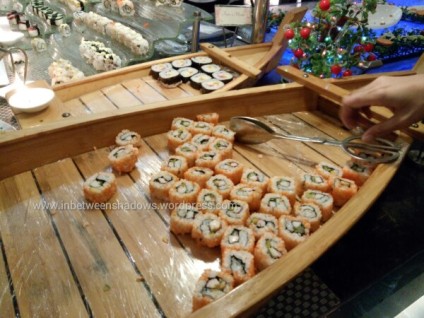 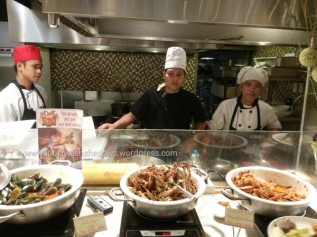 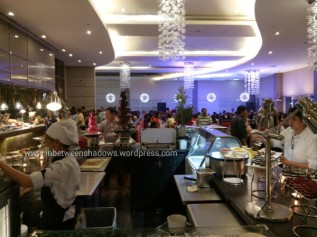 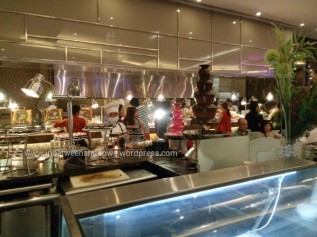 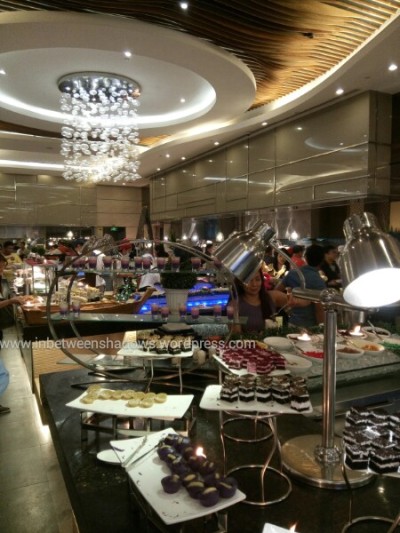 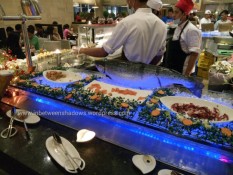 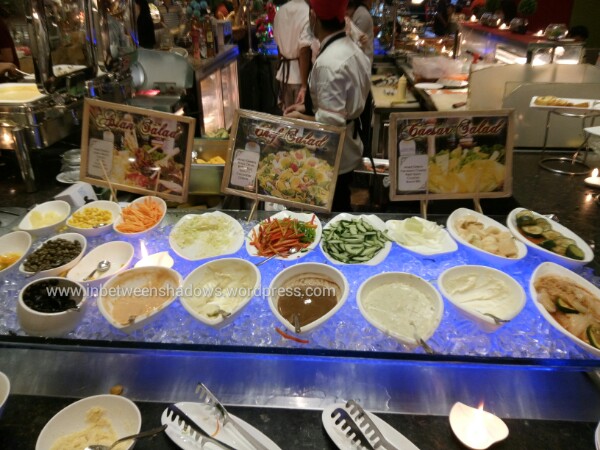 The food selection is just okay for me. It was not as extensive as those found in other buffet restaurants. 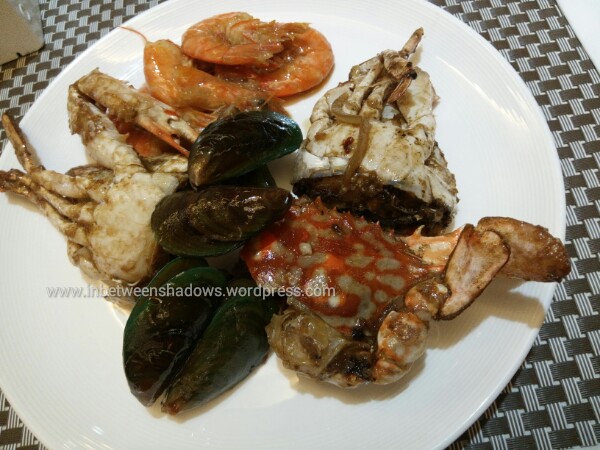 They had a Seafood station that comes with shrimps, crabs, mussels and a few others. I didn’t quite like the mussels because the taste was just ordinary for me. The shrimps tasted really great. I could totally taste the butter and garlic so it was perfect. The crabs were so-so. I say so-so because the crabs were small and didn’t have a lot of meat inside. 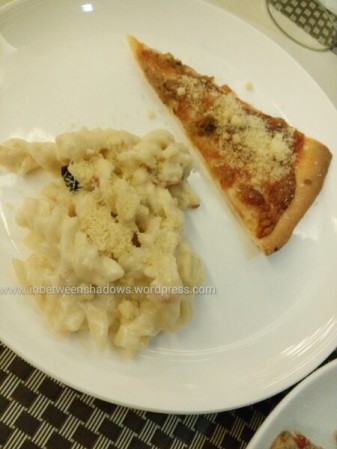 The Carbonara was delicious. It was certainly creamy enough and the unlimited Parmesan cheese even made both my pasta and pizza taste even better. They only had 2 pizza flavors available so there weren’t much options really. The Mojos tasted good but I wished they offered more dips. They only had 2 dips available which I was not familiar with so I had to skip it.

The roast beef tasted great when paired with gravy. I actually took a lot of slices that came with fats since I love FATS. However, the roast beef at The Food Club Manila was not that tender and not that juicy. I had to chew some of the pieces I got several times so it was a bit of a let down. 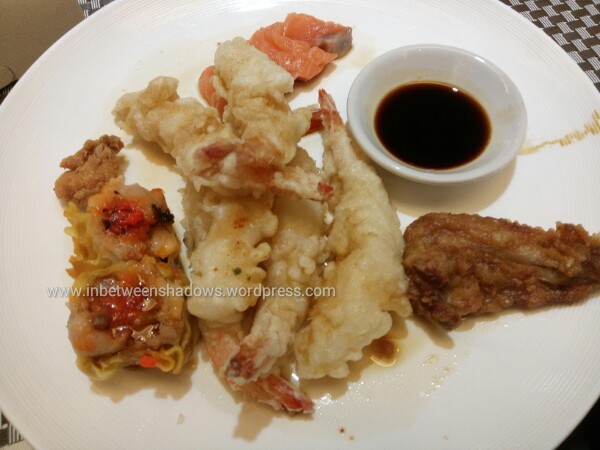 Their Japanese station had several sushi and sashimi available but I only wanted the Salmon sashimi so I took a few of those. It was delicious. The only thing I didn’t like was the fact that the pieces they offered were quite tiny. The Ebi Tempura was also good but I had better.

I must have had 4 pieces of siomai in total. I usually don’t eat a lot of siomai when I go to buffet restaurants because it’s one of those things that I can readily buy and eat at shopping malls for the price of just Php30 or less (for 4 pieces already). However, since The Food Club Manila didn’t have a lot of dishes that suit my taste, I decided to go with those that were familiar to me and that includes Siomai. 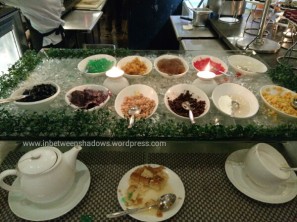 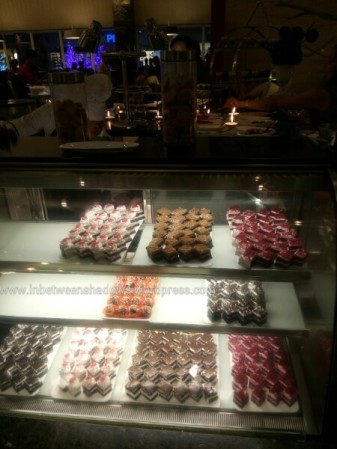 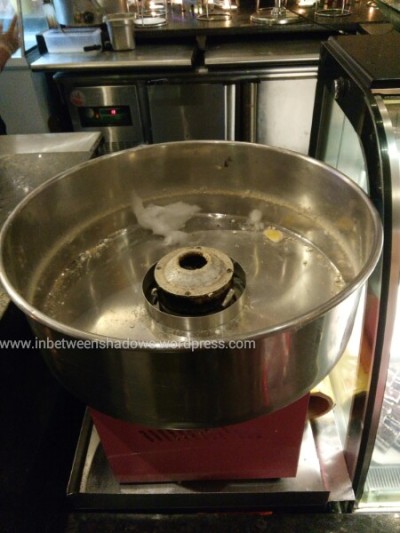 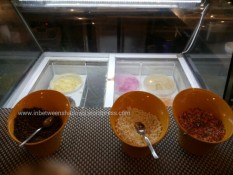 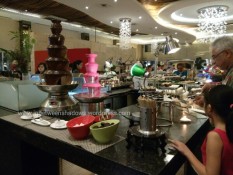 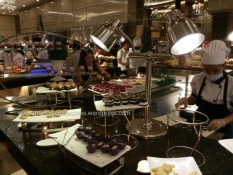 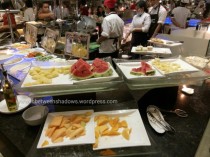 The dessert station had a lot to offer although it is still not as much as the other restaurants. Despite that, I still enjoyed their desserts. 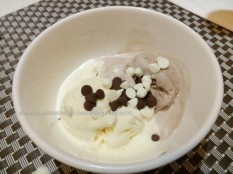 I love that the cakes were not that sweet. I usually don’t get to finish the cakes that I take due to too much sweetness but in the case of The Food Club Manila, I managed to eat all of it. The red velvet was my favorite. The Banana Crepe was great too but it wasn’t the best one I’ve had. The ice cream was just like any other ice creams that I’ve had but it’s okay. I just always love ending my meal with Vanilla ice cream so it will always taste awesome for me. 🙂 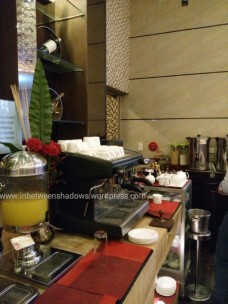 Their buffet includes unlimited drinks already so you no longer have to make additional payments for it. The Food Club Manila offers shakes but I didn’t get to try any because the selection of fruits was limited. They didn’t even have mangoes. As for their juices, they didn’t have iced tea either so I just settled with their Dalandan juice. It was surprisingly good and not very sweet. 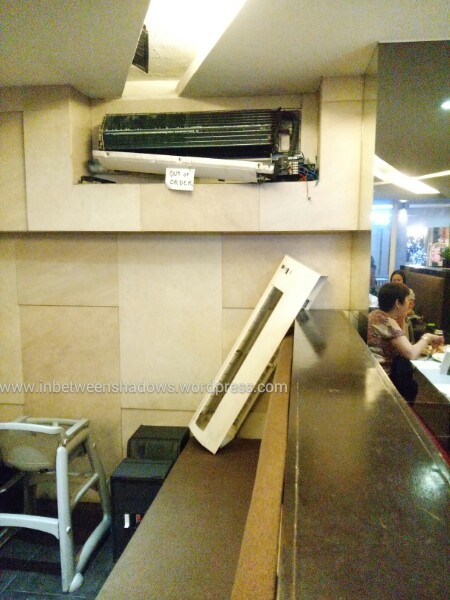 The picture above was located near the toilet area. I get that there’s probably something wrong with this particular air-conditioner but they should have at least covered it with something because it was very unpleasant to look at.

As I’ve said awhile ago, the restaurant was packed but the worst part about it was that the 100 people inside the restaurant belong to 1 group. If I’m not mistaken, I believe they are all under 1 company. Around 9PM, I started hearing a lot more noise because their “host” started a game where participants had to pass something mouth to mouth and what made people scream and laugh out loud was the fact that most of the participants were guys. I’m sure they had a great time there but we didn’t have a blast. It was just way too loud that it felt a bit disrespectful for other customers like us.

The Food Club Manila should have had a separate area for big groups because what I witnessed that time looked more like a disaster. It felt very disorganized. It just wasn’t what I was expecting.

Would I ever go back to The Food Club Manila Buffet Restaurant?

The answer is No. If I would have to pay either full price or a discounted price, I prefer to dine in other buffet restaurants that are much better than this one.

*Update: At 6:40PM today (December 12, 2015) – I received a text from them confirming my reservation. So weird! They sent me a text days after the actual date of the celebration. Talk about disorganized!